Downtown San Diego is booming with residential and commercial development.

No longer is it the once sleepy navy town boasting the best climate in the country. The weather remains beautiful year-round while the city has reinvented itself as a dynamic place to live, work and play. The Downtown San Diego Partnership’s numbers confirm this. There are more than 37,000 residents, 81,000 employees and 4,000 businesses downtown currently. In addition, more than 120 tech and innovation startups call downtown home.

When Petco Park, home to the San Diego Padres, opened in 2004, development near the ballpark hit the fast track. Fast forward to late 2008 and 2009 when projects in development and the planning stages came to a halt. That has all changed.

Today, streets from the Gaslamp to the East Village to Little Italy are alive with happy people, trendy restaurants, craft breweries, coffee houses, yoga studios and eclectic shops. The vibe is young and lively as people and their dogs enjoy the downtown lifestyle. Locals joke there are more dogs living downtown than children.

Listen to David Graham, deputy chief operating officer, City of San Diego: “We have actually been planning for a vibrant downtown for years. It began with Horton Plaza in the ’80s. The live/work lifestyle is built into our development plans. We are planning for 90,000 residents in downtown by 2035.”

Around 41% of downtown’s population are Millennials and 21% Gen X. Olga Moreno, account director at Crowe PR in the East Village, lives and works downtown. “I love walking to my office in ten minutes while enjoying the beautiful weather,” said Moreno, who rents an apartment in the Marina neighborhood. “At this point, many of my friends also live downtown, which is really fun and allows me to spend a lot of quality time with them on weekends,” she adds. 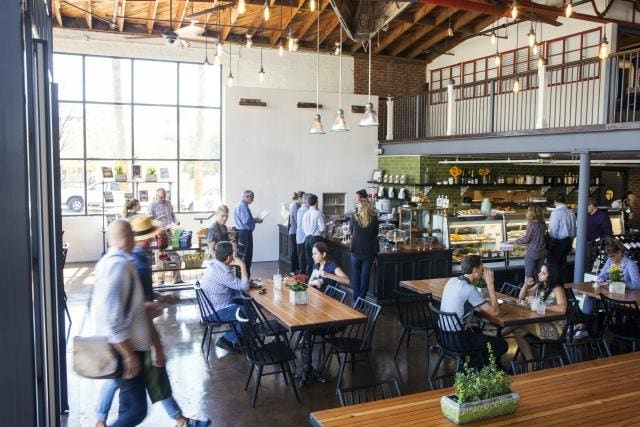 At the end of 2017, a downtown development status report by Civic San Diego said there were 25 projects under construction. This included more than 4,500 apartments, four hotels with a total of 863 rooms and 257,000 square feet of retail space. Looking at “Projects Pending Construction,” it is clear downtown’s residential growth remains strong. An additional 4,138 apartments have permit approval.

Nat Bosa, a major downtown developer and founder of Bosa Development, owns a significant number of downtown development sites. “This development cycle has been driven by rental product to meet the demand of the growing demographics of Millennials who choose to live and work downtown.”

“Downtown is a vibrant young community attracting both people and companies. It’s a city that is sustainable, mobile and smart. This is what a city should be to attract both residents and companies to propel growth,” Graham explains.

Hayley Kerr, originally from New York, moved to downtown two years ago from Los Angeles. She rents just north of the much-in-demand East Village neighborhood. “I love that I barely use a car. I walk to work, the gym, restaurants, bars, Balboa Park, the waterfront, Little Italy and Padres’ games.”

San Diego is not a city of concrete canyons. Planned into downtown’s growth are multiple parks, open spaces and pocket parks welcoming residents, workers and visitors. Community calendars offer a variety of free outdoor events including yoga, concerts and movies. “Our plans have always focused on creating a living, breathing vibrant place for all to be a part of,” Graham adds.

Another plus for downtown: It’s one of a few large urban cities with an accessible international airport located downtown. Move to downtown and ditch your car since getting around there is easy and often free. The Free Ride “FRED,” which launched almost two years ago, is a downtown shuttle service of all-electric vehicles people can access via a mobile app.

Daniel Reeves, president at Juniper Strategic Advisory, has spent six years working on the city’s economic development and public policy issues. “It’s pretty exciting times with the current redevelopment projects for Horton Plaza and Seaport Village. These are massive opportunities for large-scale revitalization in line with what Petco Park and the Convention Center did for downtown’s economic development,” said Reeves.

Beau Hodson, founder of Transparent Mortgage, specializes in residential lending in the downtown market. “People are starting careers here and this is where they want to live. I also see affordability in the San Diego downtown market compared to San Francisco or Los Angeles, which is fueling the growth.”

San Diego is a city with a lot going for it. The planned growth of downtown will only boost its popularity among desirable American cities to live, work and play in.